You probably haven’t kept count of the number of times you have heard someone utter these words when they think someone is complaining about doing a simple task. However, if you had a dollar for every time you heard it, you wouldn’t be doing too badly.

Yes, we’re all happy to accept that brains and rockets are about the most complicated things for a human being to work with. But while few of us have rockets that we need to look after, most of us do have brains.

Unfortunately, the average brain is getting older and more worn out, and as a society we haven’t thought of many good options for dealing with this problem. Our ideal course of action would be to invest billions in preventative techniques that involve scanning people’s brains and examining their genetics then use  the information that those procedures yield to formulate lifestyle and healthcare plans that keep our brains in good shape.

Yet, as we’ve already established, brains are complicated. And because complicated tends to also mean expensive, public health systems generally do not have money to invest in mass ongoing testing of the population’s brain health.

So we are currently being forced to follow a path that is even more expensive: doing nothing preventative and dealing with the consequences of severe, chronic age-related deterioration in brain health through the kinds of palliative care offered at facilities for people who can no longer look after themselves. We all know that this approach is unworkable in the long term, as it will simply consume healthcare system resources until we reach a breaking point.

Synaptitude Brain Health Steps Up to Tackle the Problem

The story of Synaptitude Brain Health is a tale of a team of scientists who have looked this dilemma in the eye and, pooling the sort of talents that we’d expect of brain experts, developed a system that makes a preventative approach to brain aging accessible to everyone and efficient in terms of health outcomes and costs.

Find out how you compare to your peers across five brain health pillars; Exercise, Sleep, Nutrition, Stress and Cognition.

Dr. Max Cynader, the founder and CEO of Synaptitude, and Dr. Trecia Brown, Synaptitude’s director or operations, recently sat down to talk about the company’s original goals and how the wellness services it offers have evolved in order to make healthy brain aging affordable and motivating.

According to Dr. Cynader, Synaptitude’s founding was driven by two big questions: “Can we develop a program that can really prevent cognitive decline based on what we’re learning in the science? Can we improve people’s brain health, make them happier, and smarter, and better looking all at the same time?”

As Dr. Brown recounts, the team’s initial vision was “to develop athree-year in-person program that allowed anyone to come into our offices and access these services.”

However, there was a drawback to this impeccably thorough approach: “The problem was that the programme is really very expensive,” says Dr. Cynader. “When you’re sequencing someone’s genome, that’s expensive. hen you’re giving them MRIs, imagine how much an MRI costs, if you’re paying for it yourself. These things are expensive.” 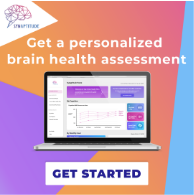 The team seemed to have become caught up in a problem that dogs healthcare providers across the world: high costs that make the optimal approach to managing a health issue prohibitive.

Good scientists always analyze their findings and are willing to revise their initial assumptions when they do so. When the Synaptitude team examined the data from their initial program, what they saw persuaded the team that the components which yielded the most benefits to participants did not require the kinds of expensive testing that are usually associated with brain care.

Consequently, Synaptitude’s team of software developers produced an app that offers the essential monitoring and exercise features of what was once a $500-a-month program/ According to Dr. Brown, this is a cost-effective program that “anyone can do anywhere, at any time, in the comfort of their own home. They don’t need to commit to coming to an office every few months to see someone face to face,and so, hopefully, that will enable individuals to remain motivated throughout the program, because this is something that they’re doing at their convenience and in their own time.”

Now that the app is being rolled out, Dr. Brown sees major potential for it to let people play a decisive role in looking after their own brains.

“A significant component of the online program is goal setting,” she says. “If an individual is able to select a goal that is most appropriate in their particular circumstance and context at the beginning of a particular intervention month, they may be more inclined to commit to achieving that goal by the end of the month, and so this is something of course we will discover as we go along. If we present a series of options to an individual, and if they feel that they are then committing to themselves and being held accountable by us to achieving that goal, that may go a long way in helping them to adopt these long-term behaviours that will promote their own healthy brain aging.”

Interested in trying out Synaptitude’s app for yourself? You can do so by visiting this page.

How Detection and Prevention are Keys to a Healthy Brain

An Optician for an Eye Checkup, a Dentist for a Mouth Checkup . . . and an App for a Brain Checkup?

Knowledge is Power – Understanding Our Brains Helps Us Age Gracefully