In an article published in the journal Intelligence, the study author reported that whether longitudinal studies of cognition measured an increase or a decrease in cognitive ability depended on a number of factors: the area of cognition under study, the length of time between cognitive tests, and the age and overall cognitive ability of the participant.

Participants in the study were aged 18 to 80 years old, and those who may have had dementia, as identified by their performance on a cognitive test, were excluded from the study. The researcher administered sixteen tests to examine five aspects of cognition. For example, memory was probed with word recall tests. Speed of perception was tested by asking participants to match symbols to numbers. Vocabulary was tested by asking participants to give definitions for various words. Spatial visualization was tested by a paper-folding test. Reasoning was examined with a matrix reasoning test where participants were shown a series of patterned figures with one figure missing, which participants were asked to fill in. All tests were performed in the same order at each visit. The study researcher created a composite score for each cognitive ability by combining test results for each aspect of cognition. 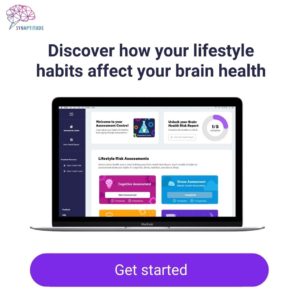 RELEVANCE OF THE STUDY

The results of this study have a number of important implications. One implication is that an initial cognitive test may not be fair to older people and people with lower cognitive abilities. These individuals saw the greatest benefit from having prior experience with the cognitive tests, as they had the largest increases in cognitive performance scores from an initial to a second cognitive test.

Try Synaptitude’s Lifestyle Assessment Today to get a free Brain Health Report. Find out how you compare to your peers across five brain health pillars; Exercise, Sleep, Nutrition, Stress and Cognition.

How Detection and Prevention are Keys to a Healthy Brain

An Optician for an Eye Checkup, a Dentist for a Mouth Checkup . . . and an App for a Brain Checkup?